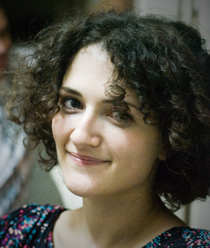 Lena immigrated to Israel at the age of 12 from Moscow, now living in Ramat Gan During her school and college years, Lena has taken part in a number of social projects, such as teaching mentally challenged people basic skills, tutoring children, and helping the homeless animals.

As an excellence graduate of  Shenkar College of Engineering and Design, she is currently working as a toy and textile designer. Lena participates in Fishka's theater projects as a graphic and decoration designer, and prepares and co-hosts meetings with foreign Jewish groups.